Inverter driven compressors are not suitable for applications in hot and/or dusty environment – TRUE OR FALSE? 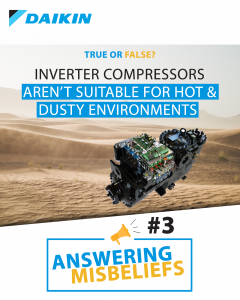 As misbeliefs can become common, and in time, can easily sediment in peoples’ mind. ANSWERING MISBELIEFS is a series of articles breaking downs false myths, with the aim to bring value in the sector and help people make informed decisions when working on commercial heating, cooling and ventilation (HVAC) projects.

Among the different myths in the HVAC sector, sometimes, there seems to be the idea that Inverter driven compressors are not suitable for installations in hot and dusty environments (e.g. industrial, rural, desert environments).

This misconception that Inverter driven compressors are not a good choice for the above-mentioned environments, probably comes from an old idea that is strictly related to air-cooled Inverters, which are also the most commonly used.

Of course, there are different types of inverters. One of them is the air-cooled Inverters. For this kind of Inverter, the cooling vector is – as its own name says – surrounding air. But the capacity of the air to cool the VFD depends on air characteristics like temperature and density. Conditions such as altitude and ambient temperature, then, must be considered when using air-cooled Inverter. In fact, the power and the current that this Inverter can manage is subject to derating according temperature and altitude. For this reason, based on the ambient condition, some restrictions must be considered for air-cooled VFD.

Also, the fact that this type of inverter uses air as a cooling vector, exposes the inverter itself to the corrosive effects polluting agents carried in the air have.

Water-cooled using glycol, then, is another type of inverter. With this solution, the heat from the inverter is removed by a water and glycol mixture moving into a loop between the electrical panel (where the VFD components are) and is rejected into the ambient through a heat exchanger in contact with the ambient air. The effectiveness of this system is influenced by the ambient conditions, as it is not possible to have the glycol coolant below the air temperature.

So, if air-cooled and water-cooled inverters were the only inverter types available, the answer to the title of this article would definitely be TRUE.

But this statement does not take into account another inverter type – the refrigerant-cooled Inverter.

In 2013 Daikin has introduced a new development for Screw Compressors – the refrigerant-cooled Inverter – which is available for centrifugal compressors as well since 2019.

Daikin refrigerant-cooled Inverter is in-house produced, and it differentiates from other VFD types for being directly integrated into the compressor’s body. This feature allows the electronics of the Inverter to be cooled by the refrigerant in the chiller’s circuit.

And most importantly, this feature allows the inverter to not being affected by environment conditions such as ambient temperature, altitude or the presence of pollutants, dust or sand in the air.

That is the reason why the refrigerant cooled Inverter is an invaluable solution for high ambient temperature applications like those in the Middle East areas, where units have to resist not only high temperatures, but also corrosive agents in the air.

Are you working on a project requiring that would really benefit from inverter technology but requires installing HVAC technology in high temperature and dusty environments? Then, get in touch with the form below!