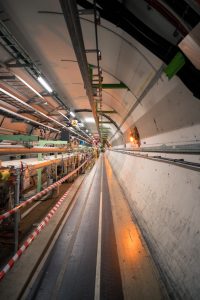 Daikin is celebrating the renewal of its contract for the supply, commissioning and maintenance of chiller units to CERN, The European Organization for Nuclear Research.

CERN is the largest physics laboratory in the world and is recognized as the place of ground-breaking ideas and discoveries, such as the world wide web and the Higgs boson.

Daikin is a partner for the CERN lab since 2012 for the supply, commissioning and maintenance of chillers, providing units for a total cooling capacity of over 31 megawatts, including screw inverter, centrifugal and scroll chiller technology.

CERN laboratories sit across the Franco-Swiss border near Geneva and were founded in 1954. CERN hosts nearly 13,000 visiting scientists and engineers representing 399 universities and research facilities per year, across 23 member states, and provides a hub for CERN community nearly 16.500 members. Together, scientists, engineers and technicians build and run accelerators, detectors and computing infrastructure, to probe the fundamental structure of the universe.

CERN is also home to the Large Hadron Collider (LHC), the most powerful particle accelerator ever built. The accelerator sits in a tunnel 100 meters underground at CERN, the European Organization for Nuclear Research, on the Franco-Swiss border near Geneva, Switzerland. The 27 km long accelerator is used to boost beams of particles to high energies before they are made to collide with each other. The process gives the physicists clues about how the particles interact and provides insights into the fundamental laws of nature.

Daikin chillers are used to meet CERN’s facilities needs in terms of process cooling. They provide cooling for data centres, for various experiments currently conducted at CERN and for the air conditioning systems   of the underground tunnel where the Large Hadron Collider sits.

The Large Hadron Collider in particular – for the size and the function – requires cooling on an unusually high scale, plus absolute precision in terms of temperature control.

Daikin has been the chiller supplier of choice by CERN, thanks to the wide range of solutions offered, from small capacity scroll compressor units, low noise emission units to high efficiency inverter driven products and high-capacity centrifugal chillers.

All those products, despite different in terms of technology and capacity, all have common traits that define Daikin as a brand and interested CERN. Those are reliability, energy efficiency and environmentally friendliness, that have been guaranteed thanks to the advanced technology Daikin offers, in combination with a wide choice of low GWP refrigerants.

“We have been working with Daikin for several years now, so we have a lot of experience with them. Daikin chillers have proved to be reliable and able to satisfy the needs of CERN applications”.

Are you interested in having more information? Then, get in touch with the form below!

Every application deserves a Daikin product