Supplying chillers for the Building 613 at CERN

Daikin has recently been involved in the commissioning of a new air-cooled chiller unit at CERN.

The project involved the Building 613, an IT facility housing part of CERN’s tape libraries comprised of magnetic tapes, tape storage robots and server racks. The chiller installed will provide the necessary cooling so the IT equipment in the facility can work properly and reliably.

About the products and the project

The Building 613 is one of the facilities dedicated to long-term data storage at CERN.

Storage devices such as magnetic tapes are used to keep safe some of the sensible and invaluable information produced within the experiments and the research conducted at CERN’s laboratories over the years.

The chiller chosen for this purpose is of the air-cooled scroll compressor type with R-32 refrigerant. This unit will produce chilled water for the cooling coils of an Air Handling Unit providing 17,000 m3/h of airflow, which is used for the air conditioning of the facility. 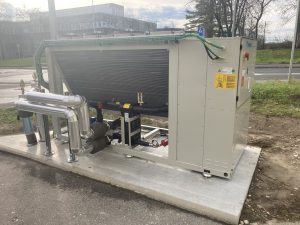 More about the project

The Building 613, being a data storage facility, is expected to operate 24/7 all year round, and could potentially consume high amounts of energy, not only to supply IT equipment with power, but also to remove the heat they generate.

Removing heat is fundamental as it prevents electrical components from overheating and fail, or just simply to ensure reliability and continuity of operations. To do that in the most energy efficient way, CERN chose a chiller form Daikin’s Bluevolution Series, a range well-known for the great performance combined with absolute reliability and low GWP.

Besides that, the EWAT-B- Series could also meet CERN’s needs in terms of low noise emissions levels required for this installation, and reduced footprint, perfectly fitting the limited plant space available.

The partnership between Daikin and CERN

Daikin partnership with CERN does not stop with the Building 613. Daikin chillers are used in CERN’s facilities to provide cooling for data centres, but also for experiments such as the ISOLDE experiment, and finally, for the air conditioning systems of the underground tunnel where the Large Hadron Collider sits.

Daikin has been supplying chiller technology to CERN since 2012, and in the last 10 years has provided a wide range of chiller solutions, from small capacity scroll compressor units, low noise emission units to high efficiency inverter driven products and high-capacity centrifugal chillers.

All those products, despite different in terms of technology and capacity, all have common traits that define Daikin as a brand and interested CERN – reliability, energy efficiency and environmental friendliness. All guaranteed by the advanced technology by Daikin, in combination with the wide choice of low GWP refrigerants.

Are you interested in having more information? Then, get in touch with the form below!

Every application deserves a Daikin product